An article I wrote for Chilled Magazine.

Pretty much the adult version of chicken soup, the Hot Toddy is known to be the go-to drink when you’re feeling under the weather, or the perfect potion to wind down with on a chilly, rainy night. Typically a mixed drink made of liquor, water, sugar and spices and served hot, this comforting classic is traditionally sipped on before going to bed. 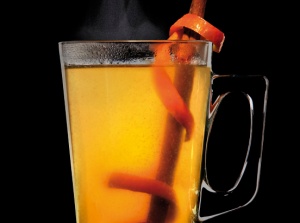 Believed to relieve the symptoms of the cold and flu with its nutritious vitamin C, soothing honey and numbing alcohol, steaming mugs of Hot Toddies are saviors once the air becomes chilly and the days grow dark. While the Hot Toddy is most commonly associated with whiskey as the base ingredient, since at least the 17th century it’s been made with a multitude of different spirits, and years ago, that usually depended on where you were from.

Traditional Scottish preparation of the Hot Toddy involves the mixture of whiskey, boiling water and sugar or honey, along with additional ingredients such as cloves, a lemon slice or cinnamon (in stick or ground form). In the Midwestern United States, a common version uses ginger ale, lemon, honey and bourbon whiskey. In some parts of Canada, heated ginger ale, honey and either whiskey or brandy was originally used to make a Hot Toddy. Today popular variations of this flexible drink include the Hot Gin Toddy, the Hot Apple Toddy, and the Grand Rum Toddy.

The origin of this calming classic is tough to pinpoint, though many believe it was first created in Scotland, possibly designed as a sweeter-tasting alternative to Scotch. It’s suggested that the name “Toddy” comes from a popular Indian beverage made from fermenting palm tree sap. The drink might have been given its name when trading with Great Britain and India was frequent and a great way to get popular exotic goods to the British.

Warm cocktails are by no means a new concept, but according to Nelson, they seem to have gained greater consumer acceptance recently, most likely due to the growing popularity in whiskey and flavored whiskies.

“Hot Toddies are relatively easy to make and allow for a wide range of customization by bartender and consumer alike,” Nelson said. “As we enter fall and the temperature starts to drop, a Hot Toddy is a great way to change things up.”

Though a Hot Toddy may not actually cure the common cold, if you drink enough of them, you’re guaranteed to temporarily forget about your misery. And alcohol is in most cough medicines anyway, right?

Preparation:
Pour a good shot of Jack Daniel’s into a heavy mug. Add a spoonful of honey, a cinnamon stick, and lemon juice. Top with boiling water, and stir. Sit down, relax, and enjoy a lazy autumn day.