An article I wrote for SpotonLI.com.

The Nico Blues, an alternative rock band from New Jersey, heated up The Vibe Lounge in Rockville Centre Friday night. They pulled in a crowd of a variety of ages.

The band is made up of Eric Goldberg and Evan Campbell, both vocalists, guitarists, and bassists, Reed Adler, guitarist and bassist, Skylar Adler, drummer and recording engineer, and Dan Goldberg, guitarist. The guys rotate instruments depending on which song they play. The band was founded in 2009, but they have been sharing and writing music with each other for years. Growing up in the same neighborhood, the five of them were friends by the time they were six and seven years old. 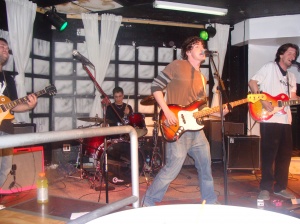 The Nico Blues played six of their songs Friday night, opening with “Mugshot In Princeton,” which is on their upcoming EP, followed by “Living Proof,” which the band considers to be their most successful song. The video for “Living Proof” was picked up by MTVU. The audience rocked their bodies and tossed their heads to the intense harmony, wearing stickers on their clothing the band handed out before the show.

Influenced by rock, folk, and punk bands, The Nico Blues are inspired by every band in the book, “Our Band Could Be Your Life” by Michael Azzerad. What keeps the band going strong is their dedication to their supportive fans.

“We don’t really think twice about spending all of our time, money and resources on being a band,” said guitarist and bassist, Reed Adler. “It’s just what we do and what we really enjoy.”