Mark Cuban’s got nothing on these sharks!

Yesterday I went to the Long Island Aquarium and Exhibition Center and made quite the splash. In other words, I took a chunk of my most recent paycheck and put it towards being locked in a cage and reeled down into a tank swimming with sharks — eight of them to be exact.

So why did I put myself in this oh-so-dangerous situation? Why would I want to spend 20 minutes under water with nurse sharks and sand tiger sharks with only pieces of metal in between us? My first answer is because it’s not your ordinary daily activity — it’s an adventure — I felt alive down there, doing some crazy thing for the first time. Life is all about experiences, and this bucket-list-esque want of mine was possible, so I did it. I’ve also gained respect for these cold-blooded creatures. Having them inches away from my face, seeing their strongly-built swaying bodies and rows of sharp teeth is a powerful thing. It made me feel small and great at the same time. In the wild I’d never get this close to these magnificent creatures! So there’s that. 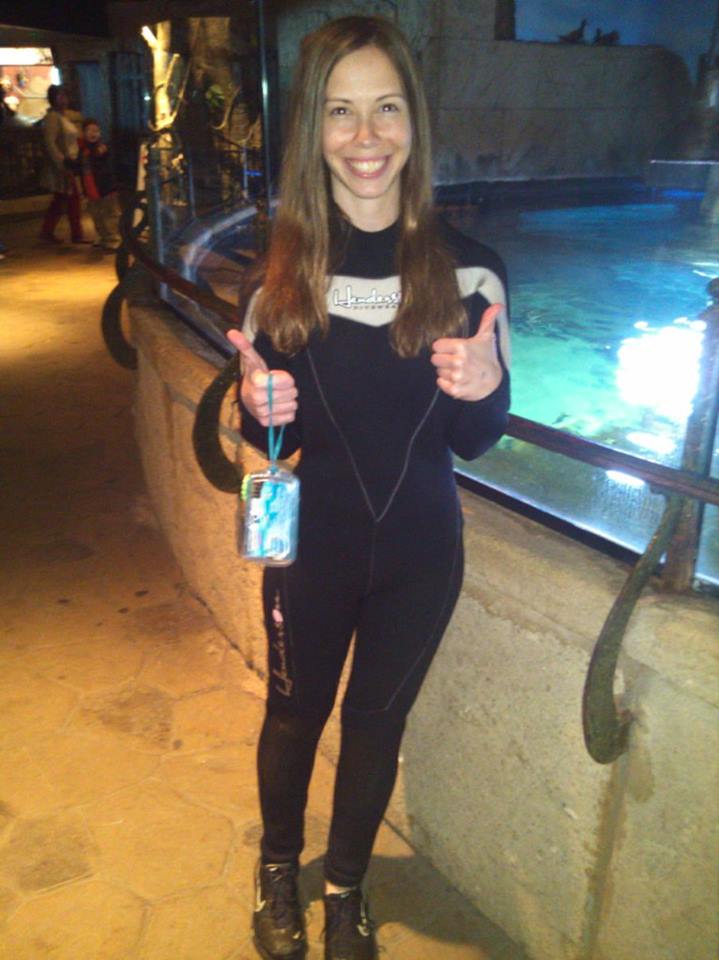 So about the dive itself. Yes, I was a tad bit nervous, as was everybody else who was diving that day (it was everyone’s first time diving, let alone diving with flesh-eating toothy fish!). My diving instructor was a very knowledgeable woman named Maggie, and she made sure everyone was absolutely comfortable, both in and outside of the cage. She answered all of our questions, and then paired us up into groups of two. We had an odd person out, since we were a group of nine, but Maggie went into the tank with us for each dive, so the last young woman to go was not alone.

After we got our scuba suits on, we were assigned diving times. I was scheduled to dive in the fourth out of five groups, with a young woman about my age named Krystina. She was super excited and animated, so together we were pretty pumped. I wandered around the aquarium until it was my time to dive, watched the third group of divers go down under, and then met back upstairs with Krystina and the gang. Before we were lowered into the water, we each took a photo with Maggie, put our masks on, had weights added to our suits (so we wouldn’t float) and before we knew it, the cage door swung shut and we were dipped into the cold water (68 degrees is cold for water!) at chest level. We hung out there for about two minutes as Maggie made sure we were both comfortable breathing in the mask under water. The mask felt tight at first, and hard to breathe in, but once I went completely under water, the pressure was off my face, although the first drop into the water didn’t feel quite right, since my reaction was to hold my breath, and then breathe super fast once my brain registered what the heck was going on. Krystina and I both popped our heads back up after the first time, but after the second, we were ready to be completely submerged. (Okay, I came back up a third time, only because I was floating and needed more weights added to me!) 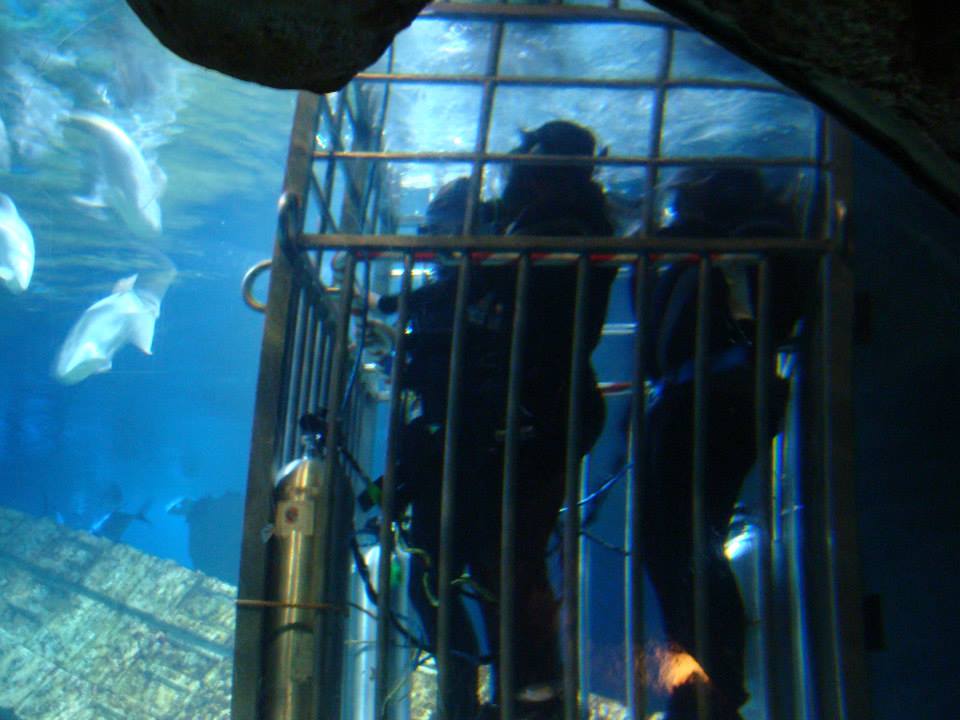 Once we were lowered completely into the blue, my mind instantly came off my breathing and I focused on the eight-foot shark in front of me. I purchased a disposable water-proof camera prior to my dive, so I had no choice but to go all photographer on these sharks. There were also lots of other species of fish in the tank, large and small, and they all swam around in a great big circle. The sharks swam in front of, behind, and right beneath the cage, and I was lucky enough to make eye contact with one of the female sand tiger sharks as she swam a few inches from my face. I think Maggie said her name was Bertha.

What I found very cool was that there was a built-in communication system between our masks, so the three of us could speak and understand each other, as long as we spoke loud and clear (we could also hear ourselves breathing like a bunch of Darth Vaders). By the way, the mask covered my nose and mouth, so I could breathe out of whichever breathing hole I chose.

Maggie answered the questions we had, as the two of us newbie shark divers snapped pictures of the swaying sea creatures. The both of us ran out of pictures at the same time, and then all of the sudden, it was time to come back up to land. Those 20 minutes in the cage flew — I mean —swam by quickly. As we were lifted back up from the water, I was ecstatic, high on life, much like the feeling I had after skydiving. It’s an experience I’ll never forget, and one that I recommend to everyone. You’ll learn so much, not only about your new fish friends, but about yourself in the process. Before I went down there, I said, “If I could go skydiving, I could go shark-diving!” And I did, and it was such a great, accomplished feeling. Now I have to search for my next adventure. Once you pop, the fun don’t stop. Oh, and you get a souvenir towel and a real shark tooth for being a survivor.

The Long Island Aquarium and Exhibition Center is located in Riverhead, New York. To learn how to plan your shark dive, check out the aquarium’s website.