Siblings Manjit and Ravinder Minhas were only 18 and 19-years-old when they got involved in brewing, distilling, and importing back in 1999. Originally from Calgary, Canada, where the drinking age is 19 (18 in certain parts), the two gained experience working the retail sectors in their parents’ liquor stores in Alberta while attending the University of Calgary for engineering. Though they both enjoyed the liquor business, they were curious about something slightly different: the beer business.

To get started, Manjit and Ravinder sold their shared car so they could afford to purchase packaging and raw goods. In 2002, the duo incorporated a Minnesota brewery called Mountain Crest Brewing Company to create and sell premium beer at discounted prices. 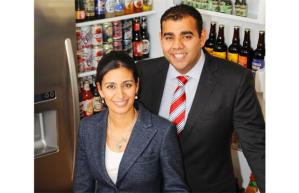 “The most creative beer culture on the planet is right here in the U.S.,” Ravinder said of their choice to move to the U.S. “Look at all the great beers coming out of the hundreds of craft and microbreweries in this country.”

The Minnesota Brewery eventually went bankrupt and Ravinder and Manjit moved their production to Wisconsin, where Ravinder began producing his beer at The Joseph Huber Brewery in the city of Monroe. In 2006 the Minhas siblings bought the brewery and made it their own. They grew the brewery’s volumes from 30,000 to 320,000 barrels in 2012, making it one of the fastest growing breweries in the U.S.

“Life is too short to drink cheap beer but it’s also a crime to drink an over-priced beer,” said Ravinder. “We gave our customers a great tasting beer at an affordable price and that is how we became one of the fastest growing breweries in the country.”

Now known as The Minhas Craft Brewery, the Wisconsin-based brewery is known to be America’s second oldest, having been in operation since 1845, and is the 10th largest in the U.S. Producing a variety of brews, from light beers to craft beers, including IPA, Double IPA, Traditional Ale and Wet Hopped IPA, along with seasonal beers such as Ginger, Hefeweizin, Winter Bock, Hazelnut Dark, and Chocolate Stout, the brother-and-sister team really turned the brewery upside down for the better.

In 2012, Manjit and Ravinder opened up a micro distillery across the street from The Minhas Craft Brewery. The Minhas Micro Distillery was established in a 100-year-old building with a tower that stands at 45 feet tall and built into a cupola on top. The distillery produces and packages a variety of small batch spirits such as Blumer’s Moonshine, Apple Pie Moonshine, Polo Club American Gin, different types of vodka, whisky, rum, and more. According to the Minhas siblings, the heritage and tradition of hand-crafting some of the finest spirits in the world dates back to 1845 at their distillery.

“My favorite drink has to be the Moonshine Watermelon Martini,” said Manjit, which is a cocktail that’s refreshing and easy to shake up. “To make it you just muddle the watermelon in the shaker, add salt, ice, Blumer’s Original Moonshine, and syrup.”

Ravinder, hinting that it’s not easy to have one favorite said, “Right now my favorite drink is the Moonshine Mule. It’s two ounces of Blumers Moonshine, a squeeze of fresh lime juice, one ounce of our Lazy Mutt Ginger Beer, and one ounce of simple syrup.”

The Minhas Micro Distillery has a full-fledged distillery operation which the Minhas team is proud to show off. Tours are held during most days of the week, where customers can relax in the tasting room, sample products, and check out the process of packaging. Tourists will also learn about Fred Blumer, one of the previous owners of The Minhas Brewery, who was kidnapped and held hostage by Chicago mobsters during the Prohibition era all because his moonshine outshined the mob’s. The movie, titled “The Kidnapping of Fred Blumer” was created by the Minhas team and will be showing at the Minhas Micro Distillery on June 14th.

Orginally written for the print edition of Chilled Magazine.